Wishing you a Joyful Easter!

From The Leo House to our loving community, we wish you all a joyous Easter! On Easter, we celebrate the resurrection of Jesus after his crucifixion. After living a life according to God’s will, Jesus suffered and died on the cross and the sins of the world died with him.

How does Easter symbolize renewal, rebirth and spreading Good News?

We rejoice on Easter because of what Jesus did for us. He rose from the dead and in this way conquered death. Through His death, we are able to renew our relationship with God and move forward in life through the hope of Jesus Christ. His resurrection means we no longer need to struggle with sins or in an unforgettable past.

How does Easter symbolize the sharing of Good News?

Easter also signifies the morning where three faith-filled women had the courage to visit the place of Jesus’ tomb to anoint him. Upon arrival, they see that the large stone covering the tomb had been rolled away revealing an empty tomb. The message of the risen Jesus to his followers was: “Go out to the whole world; proclaim the Good News to all creation.” If these women and men didn’t spread the word, Easter may have been a secret. The two main themes of Easter can be thought of as “rebirth and renewal” and “spreading good news.”

When the Sabbath was over, Mary Magdalene, and Mary the mother of James, and Salome, bought spices, so that they might come and anoint Him. Very early on the first day of the week, they came to the tomb when the sun had risen. They were saying to one another, “Who will roll away the stone for us from the entrance of the tomb?” Looking up, they saw that the stone had been rolled away, although it was extremely large. Entering the tomb, they saw a young man sitting at the right, wearing a white robe; and they were amazed.

And he said to them, “Do not be amazed; you are looking for Jesus the Nazarene, who has been crucified. He has risen; He is not here; behold, here is the place where they laid Him. But go, tell His disciples and Peter, ‘He is going ahead of you to Galilee; there you will see Him, just as He told you.’” They went out and fled from the tomb, for trembling and astonishment had gripped them; and they said nothing to anyone, for they were afraid. Now after He had risen early on the first day of the week, He first appeared to Mary Magdalene, from whom He had cast out seven demons. She went and reported to those who had been with Him, while they were mourning and weeping.

So, what do eggs have to do with Jesus and Easter? 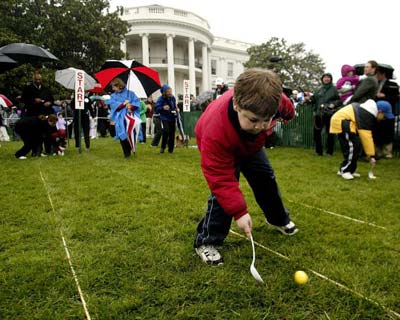 The egg is as a symbol of Spring, rebirth and reinvigoration after the harshness of winter. Cracked eggs, or empty shells are as a symbol of the empty tomb Jesus left behind. In some Easter celebrations, you may see people rolling eggs down a steep hill. This tradition was born through the symbolism of rolling away the rock that enclosed Jesus’ tomb. 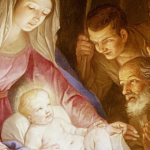