Is Love Possible in Today's World?

A Recap of Mother Dolores Hart's Visit to The Leo House

Mother Dolores Hart, OSB, enters the dining room of The Leo House in New York City to a full room of applauding guests. Waving her hands with excitement, she wears a facial expression of joy, excitement and honor.  Approaching the front of the room, she’ll begin to tell over 200 listeners about her tale of love, acceptance and making the real-life decision that we all face: “What do you want to do with your life?”

Click here to see a photo album of the event, “Is Love Possible in Today’s World?”

She starts with a question, really the theme of the evening, “Is Love Possible in Today’s World?” This question, she explains, has been on her mind for weeks leading up to the event.

“How does one even begin to answer a question like that? Is love possible in today’s world? Furthermore, how can I speak to you in a way that will make sense? Well, all you have to do is pick up a magazine and you are confronted with this concept. We are constantly challenged to prepare for pandemics and other events. While the real challenge is to ask, can the world be converted to love?”

The conversation evolves to discuss where our minds travel in the depth of the night. Hence, this is the time when we ask ourselves: How do we bring value to the world and what is our purpose here on earth? Can we spread love in the ways in which we carry out our own lives?

“Rarely do you ever hear the real purpose that underwrites our lives, the purpose of existing. If we just started to ask- is love real? Is it desired by you or the people you know? How many would say you long for that love? That it [love] would mean everything to you if you had it? Or, would you say I lost my love, the only being that ever meant anything to me. It’s my conviction that we are all created by God, who is love. This is not just a sweet saying for religious hearts. None of you would be here tonight if love did not exist. It lives in every single one of you.”

“All you have to do is go to the ocean, the shores, your garden, or look at the night sky and look at the unbelievable majesty of creation and ask ‘How did this happen?'”

Living Out Your Mission in Life 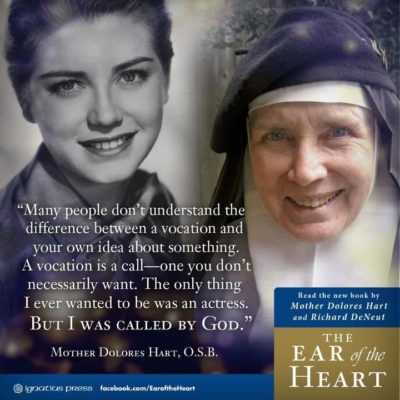 “Every single person is born into a different mission. Each one is unique. As we grow, the phases of our life go through so many slips of the promises that exist in the heart. I was once asked a question, “What advice would you give to women trying to find their purpose, women who live in this world that objectifies them and discourages them.”

I said, “Well, I’m glad I’m 79 (laughs). What helped me was that people talked to me when I said that I had a problem with this. I’d say, first of all, find out what you feel is an important mission to you. What is it that you really want to do with your life? Even if everyone in your family says “I want you to be a doctor, I want you to be a nurse’s aide etc.” There has got to be something that touches you deep in your heart, things you want to experience. When I was young I wanted to learn Shakespeare, I knew there was something in the drama that he wrote.

Walking Away From Hollywood Towards Something More Significant 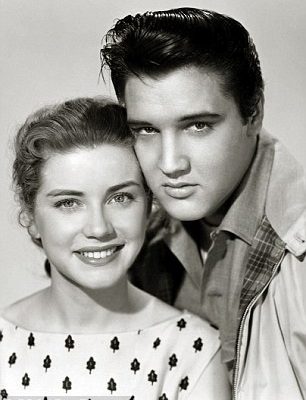 Hart made her big screen debut as Elvis’ sweetheart in 1957 in the motion picture, ‘Loving You’. She became an overnight success and starred with him again in 1958 in ‘King Creole.’

Question: In 1963, you had it all. You were being compared to Grace Kelly and compared to the likes of Elvis Presley. But then something happened. You fell in love or maybe, you became love. In a society we presume someone who gave it all up to be crazy or maybe ungrateful. How do you explain your decision to enter holy vows to a society that worships celebrities?

Mother Dolores Hart, OSB: “It is becoming more difficult in today’s society. I never felt I was ‘walking away from Hollywood.’ I felt I was walking into something more significant and by that, I took Hollywood with me.

Well let me ask you all. Have you ever been in love? Have you ever felt like you always wanted to be with someone? I wanted to be a participant in something that real, that big. I was going with Don Robinson and there was an event at which Don asked me to marry him [after dating for nearly 5 years]. In my heart I knew that I couldn’t make that happen, even though I loved him dearly. If I had been called for marriage, had been called to be a wife, it would have been to him.But I just knew in my heart that I deeply wanted to give myself to God.  I told him that every relationship did not have to end at the altar and he visited me every year at the Abbey for nearly 5 decades until he passed.

From the first time I had visited the Abbey, I knew something there attracted me so deeply. One day I went to speak with the Abbess. She asked “What is on your mind?” I said, “I have this feeling that maybe I belong here rather than in Hollywood.” She said, “Well I have some idea of what you’ve done there. I have a strong feeling that maybe you should go ahead and do your Hollywood thing. First, you are too young. You must have many kinds of experiences first that will tell you what it would be like to live a contemplative life. Right now you are operating on contemplative fear. Don’t ever operate on that type of fear.” Well I felt relieved! But after some time I still knew that I’d probably return to the Abbey.”

The Catholic Church and the Entertainment Industry

Question: Sometimes people view Hollywood as hostile to Catholic values, but St. John Paul II said that movies are ‘the shakers of value and culture.’ What are your thoughts on whether there should be a conversation between the Catholic church and the Entertainment industry? 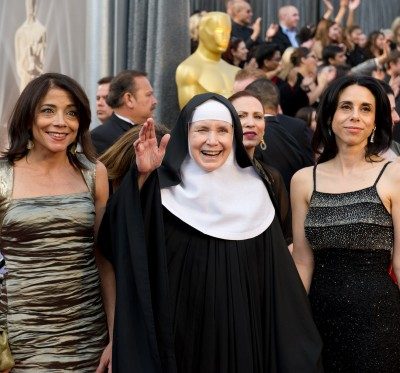 Hart remains a member of the Academy of Motion Picture Arts and Sciences, known as ‘the Academy,’ and is the only nun to be an Oscar-voting member (wikipedia.org)

Mother Dolores Hart, OSB: “Movies show what is going on in the heart of the people. So don’t be embarrassed about what is going on in the movies. The film industry is asking “Do you know that this is what is going on?” I’m not sure the entertainment industry is always the problem, nor the cause. I think therefore that it is reality that is saying that this is what is going on, this is the way we are looking at our body and so on. My body isn’t saying this is a game. We are not meant to be shown as something cute or cuddly or perfect. Rather, we are human or beautiful in the eyes of those that love us. You don’t look at anyone you love and say “They look ugly”. It’s something that is yours and you love it.”

In conclusion, this event was truly a cleansing experience for those able to attend. We hope this summary was able to give you a sense of visiting from afar!  Please join us the next time she comes for a visit. To learn more about upcoming events, join our newsletter or follow The Leo House on Facebook.

About the Abbey of Regina Laudis

The Abbey was founded in 1947 in Bethlehem, Connecticut. It is a community of contemplative Benedictine women who praise God through prayer and work. A new campaign, known as the New Horizons Renovation Project, will help address critical issues of safety and handicap-accessibility at the Abbey. Your support would ensure they are able to provide better care for the elder members and house incoming younger members. Most importantly, support of the campaign helps them continue serving as a welcoming center of prayer and spiritual solace.

Sponsored by The Leo House and Relevant Radio

The Leo House and Relevant Radio put this wonderful event together. Relevant Radio is a not-for-profit radio network providing “Talk Radio for Catholic Life.”  Their programming bridges the gap between faith and everyday life. It is available twenty four hours a day, seven days a week, 365 days per year. Visit the www.relevantradio.com to learn more or download their app by clicking here.