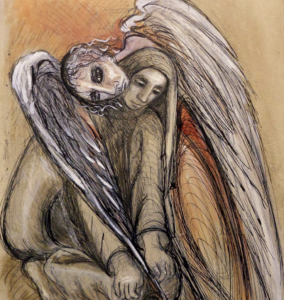 Come see a new art exhibit that is coming soon to The Leo House that will feature Catholicism-inspired artwork from Charlotte Lichtblau. The reception will take place on November 8th, from 6-8:30pm, at The Leo House on 332 West 23rd Street in Manhattan. A significant portion of her work focuses on biblical themes. In fact, the Passion of Christ was one of her most revered themes. Thus, the new installation has been aptly named, “The Passion.” Her artwork will be also be featured alongside Ailene Fields ongoing spirituality-inspired installation called Sacred Spaces.

We will honor Charlotte Lichtblau in a special way at the opening reception. A special introduction will be provided by Father Patrick J. Ryan, SJ, a longtime friend of Lichtblau for over 50 years. Father Ryan is the McGinley Professor of Religion & Society at Fordham University and also published Lichtblau’s paintings in his books, “When I Survey The Wondross Cross: Scriptural Reflections for Lent (1989),” and “The Coming of Our God: Scriptural Reflections for Advent, Christmas and Epiphany 1999).” Bruce Payne, Associate Provost for the Arts at Hunter College, will also make a speech.

Charlotte Lichtblau was born in Vienna in 1925. She came to the United States in 1940 with her parents and sister. Lichtblau converted to Catholicism in 1961, a minor scandal among her Jewish-Viennese émigré community at the time.  She always considered herself both Jewish and Catholic, and considered the latter a fulfillment of Old Testament orthodoxy.

For six decades, Lichtblau exhibited her works in galleries, museums, universities and churches in NYC and throughout the U.S. She has had two major career retrospective exhibitions in Austria. One exhibition was held at the Palais Palffy in Vienna (1994) and the second in the Pfarrheim Arts Center in Bad Aussee, near Altaussee (2002).